Gum discoloration can be sign of serious health problems and must be addressed immediately. Healthy gums have a pink color but can be also brown, depending on ethnicity or aging. Gums turning black suddenly might be due to certain medications or periodontal diseases. To learn what causes black gums and how to treat dark gums, keep reading!

Why are my gums black?

The natural reason behind discoloration of gums is melanin, the black pigment responsible for skin darkening. People who don’t have naturally dark gums, may have discolored gums because of presence of sunlight. Too much sun exposure is going to boost production of melanin and people who are involved in prolonged outdoor activities may acquire dark gums.

What diseases and conditions can cause black gums? 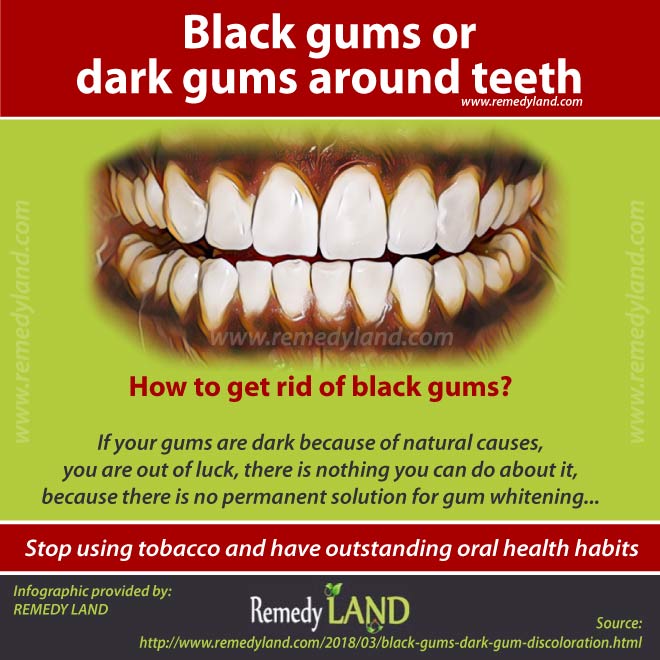 This dangerous form of gum disease is characterized by gingival necrosis, which means a death of gum tissue. The major forms of this disease, ulcerative gingivitis and ulcerative periodontitis, can cause black gums. They are usually consequence of poor oral hygiene. Those aggressive forms of gum disease must be treated and prevented from recurrence. One of the differences between them is area on which they occur. Ulcerative gingivitis is affecting only the gums and ulcerative periodontitis is affecting tissue that surrounds the teeth.

Discoloration of gums caused by calculus

Plaque that is not removed is going to harden and create tartar also known as calculus. Over time it is going to build up underneath your gum line and create dark gums. Calculus can’t be removed by toothbrush, to remove it you must visit a dentist.

Black spots on gums due to oral malignant melanoma

Adrenal insufficiency is a rare endocrine disorder characterized by abdominal pain, muscle weakness, low blood pressure, weight loss and sometimes darkening of the gums due to an increase in melanin pigmentation.

Gum cancer is an uncommon condition in which cancer cells start to grow uncontrollable on the gums. Symptoms of gingival cancer look like various lesions of the oral cavity and patient often neglect those symptoms. Gingival cancer is easily treatable if it is diagnosed in the early stages.

PJS is characterized by development of pigmented areas around the mouth and on the lips known as mucocutaneous hyperpigmentation. Those benign hamartomatous polyps sometimes appear on gums in a form of black spots.

Smoker’s melanosis is most often seen in people who use tobacco. The black pigmentation of gums is one of the symptoms of this oral condition. Those black spots can be also seen on inside of cheeks, other oral tissues and in larynx.

How to get rid of black gums?