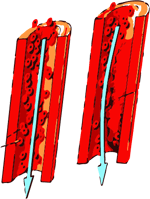 What is deep vein thrombosis or venous thrombosis

In the case of weak or disordered flow of blood usually occurs deep vein thrombosis, which is composed of fibrin and red blood cells with relatively few thrombocytes. Thrombosis caused by the activated coagulation factors, locally accumulate, due to reduced exposure to natural anticoagulant in blood.

Venous thrombosis usually start where is the most pronounced delay in valve pockets and at the site of veins injury and also can be caused by damage to the endothelium by catheter, blood stasis after surgery, prolonged sitting with lowered legs (truck drivers, airplane flight) and oral contraception.


If the clot, that is created by accumulation of blood coagulants, increases to such an extent to get released from the walls of the veins, he creates traveling thrombus known as an embolus, which can cause a heart attack or stroke. A term thrombophlebitis is also used , because thrombosis is always accompanied by inflammation of the veins or phlebitis.

The majority of patients with deep vein thrombosis do not have any symptoms, unless there is an acute disease, that can develop within a few hours to 2 days, when there is pronounced pain that calms as acute process decreases.


In the case of inflamed veins, the affected vein can be felt with a fingernail as a thickened and hard. Limb swelling occurs due to obstruction of blood flow by thrombus, perivascular inflammation or by obstruction of lymph tissue. Long lasting obstruction of blood flow in the veins may cause venous gangrene. During walking and standing occurs pain caused by deep vein thrombosis. Pain is reduced if the legs are raised. Maximum pain caused by deep vein thrombosis occurs at bending ankle with outstretched knee. This pain is called Homan sign.

The diagnosis of deep vein thrombosis

The best method for the diagnosis of deep vein thrombosis is the ascending venography or angiography, but the noninvasive methods are more frequently used, such as plethysmography, to measure the effects of venous obstruction on the normal fluctuations in volume, and electrical resistance of the legs or Doppler for examination of the hemodynamic and morphologic characteristics of blood flow through the veins. Angiography is a method in which the observed contrast fluid is injected into the veins of the extremities. Superficial thrombosis diagnosis is based on clinical presentation and physical examination, and at the same time we can observe whether it is acute arterial or deep venous blockage. Acute deep vein thrombosis prognosis in most cases can not be established on the basis of the clinical picture, Homan sign or edema, but we can with noninvasive methods or angiography. If the diagnosis of deep vein thrombosis is not confirmed and you do not start with a treatment, that can cause death due to pulmonary embolism.

To reduce the development of thromboembolic complications, it is important to know the risk factors and according to them give adequate treatment to patients and reduce mortality that accompanies these conditions. With aging, tendency for development of deep vein thrombosis increases, because soleal veins with aging lose their elasticity, and their spreading slows down the flow of blood. If we exclude risk of development of thromboembolic disease in pregnancy in young women, then presence of deep vein thrombosis is same for both sexes, as it is confirmed by the results of pulmonary emboli autopsy study, according to which, both sexes are equally represented.

During pregnancy there is an increased risk of thromboembolism due to the use of estrogen therapy. Occurrence of deep vein thrombosis in women who are receiving estrogen therapy is 3-10 times higher than in women who do not consume exogenous estrogens. There is also an increased risk in womens who takes oral contraceptive products with contents of estrogen, as estrogen therapy for prostate cancer in mens. Immobility due to hospitalization or obesity greatly affects the occurrence of thromboembolism. The frequency of deep vein thrombosis and pulmonary embolism is two times higher in obese patients. Patients who are older than 30 years, with heart diseases of any kind, have four times higher risk of deep vein thrombosis and pulmonary embolism. The risk of developing thromboembolic complications increases if heart disease is more difficult.

The risk of developing thrombosis occurs in patients with malignancy, while the risk of pulmonary embolism is up to 2-3 times higher in people with cancer. Deep vein thrombosis occurs in up to half of patients with pancreatic cancer. Trauma is one of the important factors of the development of deep vein thrombosis and pulmonary embolism and depend on the site of the injury and age. Deep vein thrombosis occurs in 30-80% of patients hospitalized from trauma. In the elderly, trauma that leads to pulmonary embolism is the leading cause of death. The greatest risk of developing blood clots is in patients with a fracture of lower leg followed by pelvic fractures of the spine, burns and trauma of the chest and head. Postoperative infection is another factor of thrombus as gram-positive bacteria can directly cause the formation of blood clots, also causes of thrombus can be endotoxin and gram-negative bacteria.

Anticoagulant medications is effective in preventing thrombosis if they are properly applied, when it comes to venous thrombosis, anticoagulant medications do not play a key importance in the treatment, because the minor role of platelets in the pathogenesis of disease. Walking is one of the important factors in venous return and reduces the possibility of thrombosis. Pneumatic stockings are used for deep vein thrombosis, and other devices with automatic compression calves, with the aim of returning blood to the heart. Anticoagulation with heparin is the first line treatment of popliteal thrombosis or proximal leg veins. Oral anticoagulation with warfarin is starting the second to the third day of heparin therapy.

Deep vein thrombosis therapy is consists of fibrinolysis system that maintains blood flow, with degradation of fibrin aggregates. Patients with deep vein thrombosis who have contraindication to anticoagulants are candidates for therapeutic blockade of the inferior vena cava, either directly or by using the intraluminal devices, in order to prevent fatal pulmonary embolism.