Deglutition is the process of taking substance into the mouth and then with voluntary and involuntary neuromuscular contractions conveying it through the esophagus toward the stomach. Or to put it simple, deglutition is act of swallowing. As easy as it might seem, deglutition is actually complex mechanism and an important part of eating and drinking.

Safe and effective deglutition is crucial and dependent upon three perfectly executed phases controlled by different neurological mechanisms. If the process of swallowing fails, then pulmonary aspiration (going down the wrong pipe) or choking can occur.

The whole process of deglutition is divided into three phases:

Prior to the oral phase, lips abduct to allow food to enter into opened oral cavity. In the oral phase, which occurs voluntarily, food is chewed with the teeth into smaller pieces and mixed with saliva from the salivary glands in order to form a soft consistency called a bolus. After that bolus is passed by the tongue from the front to the back of the oral cavity into upper part of the throat known as oropharynx. 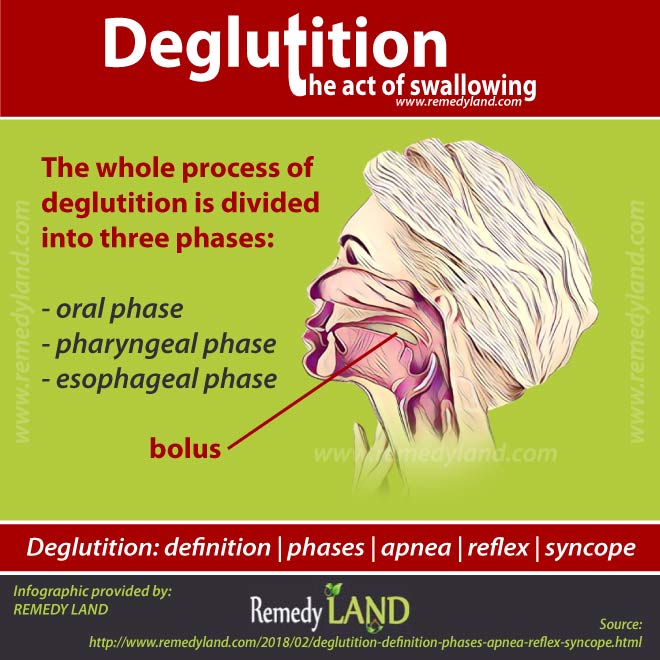 The muscles involved in oral phase of deglutition are mainly controlled by the cerebral and motor cortex. Patients with impaired oral phase might have problem creating a seal with their lips or forming and moving bolus.

The second phase of deglutition known as pharyngeal occurs when the brain makes the decision to swallow. This involuntarily phase begins when complex series of swallowing reflexes start squeezing bolus down the throat. For the pharyngeal phase of deglutition to work properly it is critical that the vocal folds are closed to prevent food or liquid to enter in airway, and the nasopharynx is covered with uvula to prevent the passage of food or liquid into the nasal cavity.

It takes less than half a second to move bolus from oral cavity into the esophagus. Patients with impaired pharyngeal phase might have problems with coughing, choking and shortness of breath.

Deglutition apnea is a brief period in which it is impossible to breath in order to swallow food safely. It takes place just before and during the pharyngeal phase when the bolus is moving through the oropharyngeal region. Absence of deglutition apnea will cause abnormal swallowing and the bolus transport disturbance.

In the esophageal phase of deglutition, the bolus moves involuntarily into the esophagus. During this final stage, upper esophageal sphincter relaxes to allow bolus to pass. When the bolus reaches the lower end of the esophagus, with help of various striated constrictor muscles of the pharynx, it relaxes to allow bolus to enter the stomach. The patients who have problems during this phase might experience problems such as abdominal pain, vomiting, burping or acid reflux.

Deglutition syncope is a relatively rare syndrome in which temporary loss of consciousness is induces by swallowing. It occurs due to a vagal reflex from the esophagus to the brain during swallowing, causing impediment of the cardiac conduction system. Deglutition syncope is closely associated with disorders of the esophagus and the cardiac abnormalities.