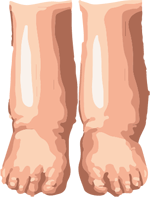 During examination of the patients, very important data can be obtained, on the etiology, nature and duration of heart disease. These include: Argyll Robertson’s pupils, splenomegaly, diffuse goiter, a big kidney, congenital anomalies, abnormal venous pulsation in the neck or above precordial, cyanosis, edema, clubbing of fingers, palpation, hypertrophy of the right or left ventricle, or diastolic movements. In the examination of the patients in the outpatient clinics an edema can be detect on lower limb joints as well as edema in the area of the sacrum and gluteal area. The presence of an edema is not sufficient for the diagnosis of heart failure in suffering patients, if addition to edema patients are complaining and on dyspnea.


An edema is often expressed in obese patients and in those with insufficient leg veins after thrombophlebitis is healed. There are other non-cardiac causes for an edema like wearing garters, stockings or elastic cuff, followed by prolonged sitting or standing, fluid retention before menstruation, as well as idiopathic edema in women. The nephrosis and nephritis terminal, cirrhosis with ascites, congenital and acquired lymphatic edema hypoproteinemia, starvation and anemia, as well as obstruction of inferior vena cava can lead to edema.

Cyanosis may be central or peripheral. Central type of cyanosis is caused by low arterial oxygen saturation, caused by intracardiac right left shunt due to arteriovenous fistula in the pulmonary circulation, certain chronic lung diseases, or due to pneumonia. And unlike peripheral cyanosis, this one is expressed in the warm mucous membranes, for instance, on the inside of the lips or tongue. It can be proven by determination of the partial pressure of oxygen (PO2) in arterial system and oxygen saturation.


A polycythemia vera can lead to the appearance of cyanosis, despite normal oxygen saturation, because large number of red blood cells reduce hemoglobin. In order to differentiate cyanosis caused by a shunt in the heart or lungs from cyanosis caused by primary lung diseases, hundred percent oxygen therapy can be used.

If arterial oxygen saturation is normal, it may be a peripheral cyanosis. Appears in cold parts of the body such as the fingertips, nose, ears and cheeks. It is caused by slow circulation in the peripheral vascular system, causing the capillary flow to release more oxygen than normal.


And some diseases such as pulmonary stenosis, mitral stenosis or heart failure may lead to a reduced cardiac output and peripheral cyanosis. However, the most common cause is tension of the nervous system that is associated with cold, cold hands and overall body exposure to cold. 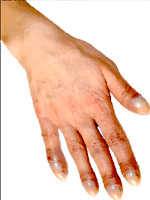 With auscultation its possible to determine the presence of structural and functional abnormalities. This is achieved by observation of changes in the first and second heart sound, the presence of an extra heart sound, heart murmurs and systolic murmurs of pulmonary artery and high-pitched sound of the systolic murmur above aorta. It is also necessary to distinguish sounds which do not have known pathological features. These include: normal first tone, high systolic sound, III normal tone, cardiorespiratory murmurs and functional heart murmurs. In some cases it is very difficult to correctly interpret the appearance of murmurs, such as in the case of pronounced heart failure with a very small cardiac output or in the case of pronounced ventricular tachycardia. Compensatory condition or reduction of ventricular tachycardia can cause low-intensity clear murmurs. For example you can hear the murmurs that previously could not detect. Based on volume, the sounds are divided by degrees from I-VI, where I is the number of noises at the lowest intensity, and VI of the strongest. Short and soft systolic murmur may be functional, especially if there are no other changes and if there are no significant changes in respiration and changes in patient position. Fatigue and tachycardia increase the intensity of each murmur. Functional systolic murmur occurs on the mitral and pulmonary valves and he is crescendo decrescendo type, who ends before systole and refers to the flow of blood from the right or left vertical in pulmonary artery or aorta. He is best heard in lean people. At full aspiration can be lost or reduced in intensity, while at full expiration can be significantly reinforced. Clear systolic murmur is probably essentially organic. Each systolic murmur, which is followed by thrill over valvular region goes in favor of valves disease, unless it comes with extreme anemia. Pansystolic murmur that can be heard at the top of the heart, usually is a result of changes in mitral valves. Spreading toward the left axilla or interscapular region and its character is organic. Systolic murmur over the aorta is transferred to the carotid artery or the upper interscapular region, when it comes to organic changes in the aortic valves. This murmur is often heard well at the top of the heart.

Diastolic murmurs may appear due to dilatation of the heart (acute myocarditis, severe anemia), dilation of aortic rings (pronounced hypertension), heart valves or deformation due to intracardiac shunts. In order to detect diastolic murmur, attention needs to be focused on digestol.