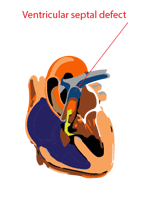 
In the third and fourth intercostals space along the sternum a loud, rasping systolic murmur can be heard a long. This may not be the only finding of small defects. In the case of large shunts at the top of the heart you can seen raising of the right ventricle, mid diastolic murmur and the third tone can be heard.

In large shunt, right or left ventricular or both, as the left atrium and pulmonary arteries were enlarged, and the pulmonary flow is increased.

ECG may be normal or ECG may show hypertrophy of the right, left or both ventricles.

With cardiac catheterization, it is possible to diagnose even the most difficult cases. In children with cardiac decompensation is necessary to establish a diagnosis and advise appropriate treatment.

Ventricular septum defect can be asymptomatic with normal hemodynamics of the heart. However, in children, it can be a serious flaw, that results in death due to cardiac decompensation. These patients should undergo surgery. Ideal case for surgery with the use of the machine for extracorporeal circulation is the one with the big left-right shunt, left ventricular hypertrophy, and only moderate pulmonary hypertension. When it comes to elevated pulmonary hypertension (pulmonary artery pressure > 85 mm Hg), and left-right shunt is small, then the risk of surgery is at least 50%.

Surgical intervention is contraindicated if the shunt is reverse. However, if a surgical intervention is necessary in the case of cardiac decompensation caused by large left-right shunt, placing a ring around the pulmonary artery, which will reduce shunt, is recommended. Only in children of 5-6 years of age it is necessary to make a definitive correction. Based on the increasing experience it has been concluded that some defects are closed spontaneously (perhaps 30 – 50%). Therefore, surgery should be delayed until late childhood, except in cases where the inability is very strong or when it is concluded that pulmonary hypertension is increasing.

Patients with typical murmur can expect a normal life, except that they can always develop bacterial endocarditis. With large shunts in early childhood a congestive heart occurs and these patients rarely survive 40 years of age. Reverse shunt encountered in about 25% of cases and leads to a Eisenmenger syndrome.