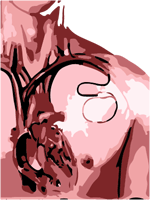 
Other letters indicate changes in the VVI pacemaker, depending on the modulation rate or cardiovascular changing demands of the heart. The fifth letter if there is one is related to the function of anti-tachycardia.

After surgery, the patients Vehicle Licensing Agency informs that he has a built VVI pacemaker and therefore they issued him an appropriate driving license. You need to avoid the stress of exercise three to four weeks after installation of VVI pacemaker, after that the patient can continue with most physical activities, but should be careful not to damage the pacemaker.