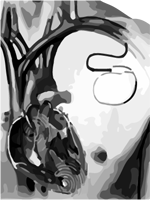 DDDR pacemaker marks atrial and ventricular rates and senses both chambers of the heart. DDDR pacemaker has a sensor that records a need for higher cardiac output and can regulate the heart rate automatically. If the heart natural pacemaker function is failing, DDDR pacemaker can take over their role and ensure further smooth functioning of the heart. Sometimes they are referred to a dual chamber pacemaker with adaptability, and can be adapted to the special needs of every patient who needs this type of pacemaker.


DDDR pacemaker is recommended for treatment of the patients with any heart rate lower than sixty beats per minute and in patients who have sick sinus syndrome, AV block, or both of them. The perfect patient for DDDR pacing is the one with combination of sinuatrial node and atrioventricular nodal dysfunction in whom DDDR pacemaker pacing will restore rate responsiveness and atrioventricular synchrony. For each patient, specifically, a doctor have to decided that the patient should be used DDDR pacemaker, taking into account the advantages and disadvantages, or just single chamber pacemaker.


Modern DDDR pacemakers are capable, complex devices that with its new functions can enhance hemodynamics and facilitate the functioning of the patient’s heart.

DDDR pacmaker means the pacemaker is pacing electric activity in the atrium and the ventricle and it is sensing activity in each of them. When it senses an event, it is going to either trigger a response or just inhibit pacing, and the rate is responsive. The therapy for bradycardia with pacemakers remains one of the greatest healthcare accomplishments of the 20th century. Many different types of devices are now on the market as a result of physiological discoveries and advances in engineering.


The majority of DDDR pacemaker system malfunctions are benign, but some can be life threatening such as: collapsed lung, blood building up in the pleural cavity, gas embolism, perforation, dislodgement, diaphragmatic stimulation, pericardial tamponade, hematoma, pacemaker infection, blood clot …