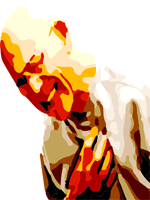 Arteriosclerotic heart disease or coronary artery atherosclerosis is the most common underlying cause of cardiovascular events and death. It is thought that an abnormal lipid metabolism is responsible for the accumulation of fat in blood vessels and fibrosing tissues in one place. This narrowing due to deposition of fat is called a Plaque and is caused by hypertension, high levels of cholesterol, high blood sugars and other. This change leads to progressive obstruction of pericardial part of the coronary arteries and their major branches.


The heart muscle is stronger, at first increases effort and work, but it does not work that way indefinitely. In his work, there are some changes over time. The heart increases from increasing effort, like any other muscle. Over the years, if it is not affected by some inflammatory processes, the heart begins to expand. His extended muscle weakens and is no longer able to function normally and to supply sufficient amount of blood to life’s important organs. Movement becomes more difficult, followed by a rapid fatigue, palpitation, short breath and suffocation during extended fatigue.

The immediate cause of changes in the heart is arteriosclerosis. Arteriosclerotic heart disease appear to affect particularly blood vessels, coronary artery and its branches due to vascular diseases caused seizures and cardiac infarction. Larger branches of the coronary arteries are mainly affected by atherosclerosis. Atheromatous plaque contribute to easily development of myocardial ischemia, stroke and complete closure of the arterial lumen and the subsequent development of myocardial infarction.

Risk factors (established on the basis of the results) that support the development of ischemic heart disease, including genetic predisposition, high blood pressure, diabetes mellitus, hypertriglyceridemia and hypercholesterolemia. Other less important factors include obesity, syphilis, mental stress that can cause a fluctuation in blood pressure and it also leads to increasing pressure in the blood vessels and the corresponding physical constitution also lead to atherosclerosis.


Men are affected more often than women by arteriosclerosis, and that ratio is 4:1. Forty years ago the ratio was 8:1. The men have most pronounced disease symptoms at the age between 50-60 years and women between 60-70 years, depending on a difference in the conditions of work and life. Advanced degree of atherosclerotic coronary artery disease and even complete occlusion may remain clinically undetected. Can be detected by chance after death to other causes. For now we are depending on a coronary angiography as the only tool with which it is possible to determine the localization and degree of stenosis. There is no relationship between clinical signs and the extent of the disease.

Brain localization of arteriosclerosis is generally followed by a progressive deterioration of memory, disorientation in time and space, psychological absence, there may be disturbance of vision and speech, loss skin sensitivity to external stimuli, a sudden loss of muscle strength in one or more limbs or the allegorical cerebral thrombosis. Cardiac localization can lead to progressive renal contraction of heart muscle, due to lack of oxygen supplied by small amounts of blood that arrives, there may be disturbances of cardiac rhythm and paroxysmal tachycardia. If you are in a situation where arteriosclerosis blood vessels are supplying the lower limbs, there may be spasmodic pain after walking, low skin temperature of limbs and later, gangrene, thickening and darkening of the skin. If the process is localized in the renal arteries, the effects can be mild compromised renal function or hypertension. The situation became more serious in the kidney when sclerosis occurs in small blood vessels. Senile arteriosclerosis grows with the aging of the whole organism and is considered a physiological phenomenon caused by the aging of the arteries.

Treatment for arteriosclerosis may consist of a iodine which is a substance that intend to promote resorption of pathological formations, which hardly can be considered to be fully proved. High doses of iodine in the blood vessels can cause painful changes resembling arteriosclerosis, therefore, small doses are recommended. Effect of iodine is also linked to its vasodilator effect and the ability to lower blood viscosity. On the other hand, we must accept the fact that patients frequently points beneficial influence of iodine. You can experience: headaches, dizziness and ringing in the ears. Iodine medications are given after a meal and it is always better to be taken with milk or mineral water. Iodide treatment usually is prescribed in the summer months to avoid the catarrhal state of the upper respiratory tract. In severe cases of arteriosclerosis following medical procedures can be applied: bypass surgery that use healthy blood vessel to bypass plaque and improve flow of blood, angioplasty to open narrowed arteries due to deposition of fat and carotid endarterectomy to remove deposition of fat from two large blood vessels in neck.

Garlic extract have indirect effect on atherosclerosis and arteriosclerosis related diseases, he is improving the function of the gastrointestinal tract, reduction of cholesterol, lowering of high blood pressure, increasing circulation of blood in capillaries, reducing triglycerides levels and preventing thrombosis and diabetes. Garlic extract direct impact on atherosclerosis could be explained by his capability to decrease lipid deposits in arterial tissue and also to reduce intracellular lipid formation. A balanced and healthy diet is an essential part of treatment for arteriosclerosis in an effort to reduce high blood pressure and cholesterol and help with weight management. Animal fats in any diet should be prohibited. We must bear in mind that the weakness of the heart muscle that often fallow arteriosclerosis, may increase significantly when you turn off the meat intake. Still, a gradual transition to a predominantly vegetarian diet is desirable. A diet should be rich in vegetables and fruit, foods containing high amounts of soluble fiber, lots of fish which are rich in omega-3 fatty acids that can protect you from thrombus, inflammation of the heart and acute myocardial infarction. You should reduce the intake of salt and alcohol. Daily physical exercise can reduce a lot of atherosclerosis risk elements such as ldl cholesterol, hypertension and overweight.

Discuss with your doctor before starting a new fitness program. Consult him about the volume and what types of physical exercise are not dangerous and they are suitable for you. Preserving a normal body weight will reduced risk of coronary artery atherosclerosis.