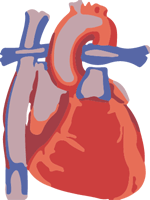 What is Fontan procedure

The Fontan procedure is an open heart surgical procedure used in children with a defect in the structure of the heart and great vessels which are present at birth in which a channel is formed for a blood with little oxygen to bypass the right ventricle and pass directly to the lungs for new oxygen.

The Fontan operation is carried out to deal with several complex congenital heart abnormalities including when a tricuspid heart valve is missing, a tricuspid heart valve is abnormally developed, when a pulmonary valve does not develop properly with an intact ventricular septum, when elements of the left side of the heart do not develop entirely, when people have a large left a ventricle and small right ventricle and double inlet right ventricle. This type of medical procedure is performed on children aged from two to three years, and prior to this medical procedure, many children already have a bidirectional Glenn shunt.


The Fontan procedure can be performed in many ways, but in all of them are connecting the posterior vena cava to the pulmonary artery. Patients with pulmonary high blood pressure cannot perform Fontan procedures. The Fontan operation have two main driving forces, enabling flow of oxygen-poor blood into the lungs where is increased pressure in the veins and the breathing. The pressure in the veins is increased 3-4 times with this procedure.


When we breathe in fresh air, volume inside of the chest increases and fresh air is drawn into the airways. At the same time the blood is drawn into the lungs and airways, blood enters the lungs with a lack of oxygen and comes out enriched with oxygen.In order to Fontan surgery is carried out on the patient, patient must have good lungs.


There are various forms of Fontan procedures such as:

The lateral tunnel or total cavopulmonary connection is used because it is came to the conclusion that the blood that comes from the veins in collecting camber is going to create turbulence and produces clots which after that can create bigger problems.

The extracardiac conduit is a type of Fontan surgery in which the SVC connects the right lung pulmonary artery, but the IVC that comes from the lower half of the body is in connection with artificial material shaped like a tube.

To be successful Fontan operation, it is necessary that single ventricle is not too damaged by the work of pumping blood under pressure and pulmonary arteries have to stay relaxed, otherwise the blood would not be able to flow.

After Fontan surgery some children are able to deal with highly physical activity while in some children, and little effort is a heavy burden, but most are in the middle. Most of the children after the Fontan operation use blood thinner to prevent the creation of clots in the blood.