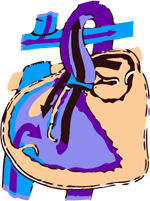 What is Glenn shunt surgery

Glenn shunt is a temporary treatment that is applied on children (preceding the Fontan procedure) to improve blood flow to the lungs, where only one ventricle is working properly and the other is much smaller and does not send enough blood to the body and lungs.

Glenn shunt is surgery in which the superior vena cava is connected to the right pulmonary artery in order to send the blood right in the lung and pass away heart and his thin ventricle that prevents proper blood flow. Glenn shunt is trying to evade completely inadequate heart and his is sometimes applied to both lungs and then is called the bidirectional Glenn shunt.

Patients who need Glenn shunt are those who suffer from a congenital heart defect and signs by which one can recognize are the bluish skin, lips and fingernails, which occur due to deficiency of oxygen in the blood. Glenn shunt is paliative type of surgery that does not correct the problem and he is performed on open heart, the surgeon makes a small incision in the chest after which the patient stays in the hospital a couple of days.


Glenn shunt is a very safe operation but death can occur in some situations. After Glenn shunt, over time, there may be the reappearance of cyanotic episodes and peripheral saturation, in some cases, that can lead to infection and pericardial or pleural effusions.