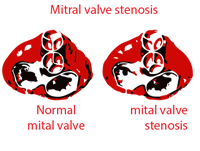 When a person is infected with streptococcus bacteria, that can caused inflammation called rheumatic fever. In the beginning the patient suffers only from strep throat, and in most people this does not develop into serious consequences, but if it is untreated, the body begins to defend himself and that can cause inflamed and swollen brain, joints, skin and heart to stop beating. This inflammation can cause scars on the heart valves, that later can develop into rheumatic heart disease. Just a little number of patients with streptococcal infection or strep throat are likely to develop rheumatic fever. When rheumatic fever is cured she does not leave any effects on the brain, joints or skin, but only has consequences on the heart.


Criteria for diagnosis of rheumatic fever

Minor signs of the disease:

Diagnosis of rheumatic fever can be set if there are at least 2 or more major signs of the disease. Although early signs of rheumatic fever also can be rheumatoid arthritis, neurocirculatory dystonia, bacterial endocarditis, collagen disease and chronic infectious diseases.

Rheumatic fever is an acute or chronic system disease, which for unknown reasons may gradually bring up deformation of the heart valves. Rarely, can have acute and violent form.

Rheumatic fever is the most common cause of heart disease in people under 50 years of age. According to the general problems can be classified as a third disease, after hypertension and atherosclerotic coronary disease. Rheumatic fever happiness little more  in men than in women, but the chorea is more common in women. Mostly appears in the age between 5 and 15, rheumatic fever is rare in children younger than 4 years and people after the 50s.
Rheumatic fever begins with hemolytic streptococcus infection and usually occurs 1-4 weeks after tonsillitis and otitis.


In the acute phase of rheumatic fever endocardium, myocardium, pericardium, lungs and pleura can be implicated. Characteristic changes are manifested in the form of perivascular granulomatous reaction, and vasculitis. Mitral valves were affected in 75-80% of all cases, the aortic valves in 30%, tricuspid and pulmonary valves in less than 5% of all cases. On the surface of edematous valve can come to the appearance of small red granules. They can be a complete cured. Progressive changes on the skin, that can result from acute or chronic inflammation, can be developed through months or years.

The clinical picture of rheumatic fever

Major signs of the rheumatic fever

Carditis findings can be used for diagnosis of rheumatic fever in cases where: In history we have data on rheumatic fever or valvular disease on rheumatic basis. If we know that in the past 4 weeks, there was a streptococcal infection of the upper respiratory tract.

ECG: the most important changes are prolonged P-R interval of more than 0.04 sec. Less specific changes in the contour of the P wave and T wave inversion.

Changes in the quality of heart sounds.

Pansystolic murmur at the top of the heart that persists or gets louder during the disease. Carey Coombs high diastolic murmur can be heard.

The rapid rhythm above third tone is difficult to differentiate among children and in patients in juvenile age.

Sinus tachycardia exists regardless of volume and degree of temperature. Remains during sleeping and significantly increases even with the lowest activity.

The next two characters usually appear to be associated with carditis, so there are a low value for the diagnosis of diseases in the beginning. However, occasionally can appear before carditis, and can be strong evidence for the existence of the rheumatic fever.

Sydenham chorea – may occur suddenly as a totally isolated case or can be developed as part of rheumatic fever. It may be that in 50% of cases, there are other signs of rheumatic fever. Girls suffer more, and rarely occurs in adults. Chorea is accompanied by constant purposeless movements of the limbs, body and fascial muscular. There are often unspecified grimacing facial movements. These movements are aggravated by emotional excitement, and completely disappear during sleep. These episodes can last for weeks and sometimes even months.

Arthritis encountered in rheumatic fever is characterized by migrating pain, which occurs gradually or suddenly attacks large joints. Joints become hot, red, swollen and tender, while the inflammation in previously affected joints is easing. Body temperature increases progressively with changes in inflamed joints. In adults one joint can be affected or more smaller joints. Acute arthritis lasts for 1-5 weeks and stop without leaving deformations. Affected joints are among the more important sign of disease, but only in cases where there is fluid and signs of inflammation. This is the opposite of arthralgias, where there is a pain and braking, but without these objective signs.

Arthritis and arthralgia are common in childhood and younger age, and they are accompanied by fever and increased sedimentation. Streptococcal infection and throat problems are also often seen. Coincidentally these factors, combined, are confirming the diagnosis of rheumatic fever. Final diagnosis requires additional manifestations such as carditis or rheumatic manifestations such as erythema marginatum or chorea.

Laboratory analysis of rheumatic fever is useful for three reasons:

As a non-specific information about inflammation, sedimentation is almost always increased during active rheumatic fever, except when chorea is the only clinical sign. There may be variations in the number of white blood cells, and there is a normochromic anemia. Proteinuria is occasionally found, but these findings do not suggest glomerulonephritis. There is also a streptococcal infection.

High titer or increased antistreptolysin titer go in favor of fresh infection, but this is not confirming existence of rheumatic fever. Culture swabs from the throat can extracted beta-hemolytic streptococcus in 50% of cases, when it comes to rheumatic fever.

Hard evidence against diagnosis is low presence of anti-streptolysin O titer (50 Todd units) that does not increase by the repeated testing. In the case of active rheumatic fever the sedimentation is rarely normal.

The differential diagnosis of rheumatic fever

Incubation of rheumatic fever in children last for months and weeks in adults. In the span of 5 years, about 20% of the children can get reinfection. However, the infection can not be repeated often if the patient is feeling well for 5 years or more, and rheumatic fever is rare after 21 years of age. Early mortality is 1-2%. If rheumatic activity persist and in addition there is a very enlarged heart, then cardiac decompensation, and pericarditis, then the prognosis is poor, it is considered that 30% of children with these changes die within 10 years from the beginning of the first attack. Eighty percent of patients experience a mature age, and half of them have little or no limitations in life activities.

After the first attack, about 1/3 of young patients have problems with heart valves, usually a combination of mitral stenosis and insufficiency. After 10 years in 2/3 of patients have valvular heart disease. In adults, heart damage occurs in less than 20%. Mitral insufficiency is the most common, and aortic insufficiency is more frequently presented in adults than in children.